Be the first to review this product
$1.97
In stock On Sale
SKU
247Plant-Jade-Gollum-FP1
Add to Wish List Add to Compare
Skip to the end of the images gallery 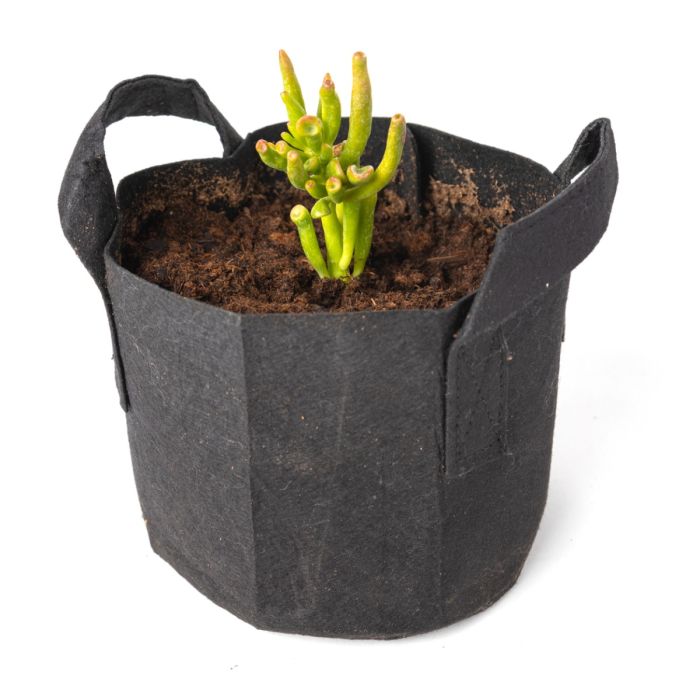 247Garden's The Hobbit's Gollum AKA 'Monstruosa' (syn. 'Cristata', 'Gollum', 'Hobbit'), Shrek's Ears, is part of the same family as the Lucky Money Tree called the crassula ovata. A trumpet-shaped, skimpy branched, shrubby cultivar up to 90 cm (3 ft) tall and around 60 cm (2 ft) wide, with tubular leaves that have a reddish tint. The flowers are small and star-like, white or pinkish-white in colour. Resembling a small tree, its trunk becomes thick with age. They grow in well-drained, regularly watered soils in bright airy conditions under a few hours of sunshine in a day, as well as in part shade. They have a superficial resemblance to Sedum rubrotinctum. They are colloquially known as spoon jade, hobbit jade, Gollum jade, ET’s fingers, finger jade, trumpet jade, and ogre ears. Much of its popularity stems from the low levels of care needed; the Hobbit's Gollum plant requires little water and can survive in most indoor conditions. It is sometimes referred to as the money tree; however, Pachira aquatica also has this nickname.

The Hobbit's Gollum jade plant is an evergreen with thick branches. It has thick, shiny, smooth pencil-like leaves that grow in bunches along the branches. Leaves are a rich jade green, although some may appear to be more of a yellow-green. Some varieties may develop a red tinge on the edges of leaves when exposed to high levels of sunlight. New stem growth is the same colour and texture as the leaves, becoming woody and brown with age.

It grows as an upright, rounded, thick-stemmed, strongly branched shrub and reaches stature heights of up to 2.5 metres. The base is usually sparsely branched. Sometimes a single main trunk of up to 6 centimetres in diameter is formed. The succulent shoots are gray-green. The bark of older branches peels off in horizontal, brownish stripes. Although becoming brown and appearing woody with age, stems never become true lignified tissue, remaining succulent and fleshy throughout the plant's life.

As a succulent, the Hobbit's Gollum requires little water in the summer and even less in the winter. It is susceptible to overwatering, especially during the cold season. Watering excessively can cause leaf fall and root rot. On the other hand, a lack of water can also damage it. However, problems with root rot and overwatering is pretty much solved with 247Garden's Aeration Fabric Pot so pretty much it's a non issue. You just need to remember to give it water once a while and give it some Vitamin D from the sun. It should be grown in a porous substrate with good drainage, which will vary depending on the climate it is grown in. It requires about 4–6 hours of direct sun or medium shade exposures with bright light. In regions of mild weather it can withstand some light frost, provided that the substrate is kept dry.

The Hobbit's Gollum may display a red tinge around its leaves when grown with bright sunlight. In more extreme cases, the green colour of the plant is lost and can be replaced by yellow. This is caused by the jade plant making pigments such as carotenoids to protect from harsh sunlight and ultraviolet rays. The plant also flowers in the wintertime, particularly during a cooler, darker, dry spell. Crassula ovata is sometimes attacked by mealybugs, a common nuisance of the succulents.

The Hobbit's Gollum jade plant is also well known for its bonsai capabilities, since it forms a bonsai very easily when pruning is done correctly. Many who learn bonsai begin with a jade plant, since they are durable, easy to put through the bonsai process, and attractive.

Like any jade plant, the Hobbit's Gollum is also known for its ease of propagation, which can be carried out with clippings or even stray leaves which fall from the plant. Jade plants may readily be propagated from both with success rates higher than with cuttings. In the wild, vegetative propagation is the jade plant's main method of reproduction. Branches regularly fall off wild jade plants, and these branches may root and form new plants.

Like many succulents, jade plants can be propagated from just the swollen leaves which grow in pairs on the stems. While propagation methods may vary, most follow similar steps. Typically, the wounds on the leaves are left to dry and callus over. Then, the leaves are placed in or on soil. Roots begin to grow on severed leaves about four weeks after being removed from the stem. Environmental factors such as temperature and humidity affect the speed at which the roots and new plants develop. Foliage usually appears soon after new roots have formed.

Scale insects are common pests of Crassula ovata and can cause deformation of the plant during growth. An infestation can be eliminated by killing each insect with a cotton bud or brush that has been soaked in rubbing alcohol. This process is repeated daily until all mealybugs have been killed, as well as new insects that may still hatch after the mealybugs living on the plant have been killed. Aphids are also common pests, but they tend to infest the stems of flowers. Spider mites can also cause problems. Exposure to sap or leaves can cause dermatitis in humans.[8]

Like many species from the Crassulaceae family, the jade plant is toxic to horses, and dogs and cats, as well as mildly toxic to humans, in some cases, with skin contact. In this respect it differs greatly, possibly dangerously, from Portulacaria, which is edible to humans and other animals. Rest assure though, most animals are pretty smart and it's only a big problem when consumed. Smart animals and smart human will not eat this and just make sure you don't feed it to be baby!